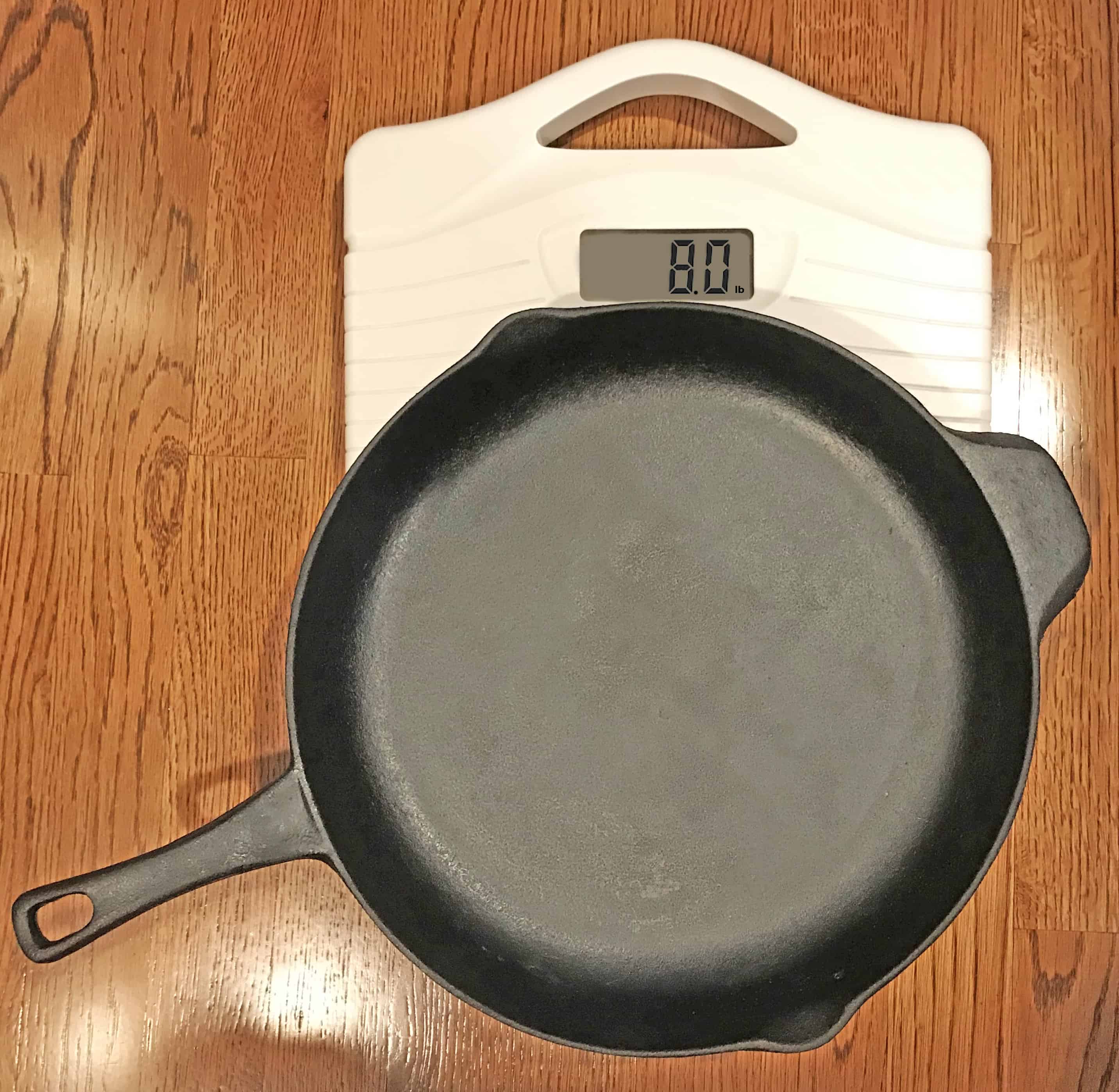 Cast iron skillets are durable, versatile, easy to use, and retain heat for long periods. But, despite these positive attributes, cast iron skillets have one major flaw; they’re extremely heavy.

If you plan to buy a cast iron skillet, it’s important to know much much it weighs to make sure you’ll be comfortable handling it regularly.

So, how much does a cast iron skillet weigh?

5, or even 8, pounds may not seem like a lot, but when you consider the additional weight of food and the fact that cast iron skillets typically have short and stubby handles, every pound counts.

For comparison, stainless steel and aluminum skillets weight about half as much as cast iron skillets of the same size. I go into more detail on this comparison later in the article (skip ahead).

There are dozens of cast iron skillets on the market, and each one has a different size, design, and thickness, all of which impact their weight. Skillets that have large handles, multiple pour spouts, and high walls carry extra weight due to the additional material of those features. Ones with short handles and thin walls are typically much lighter.

Determining the exact weight of a particular cast iron skillet isn’t always easy. Often, its weight is not printed on the packaging or called out within the online listing.

To find out the exact weight, you either have to read the fine print within the user guides and spec sheets of each skillet, or you might have to contact the manufacturer. Fortunately, you don’t have to waste your time doing either of those things because I’ve done that research for you.

In this article, I provide:

Let’s dive right into it!

(Use the links below to navigate this article.)

How Much Does a Cast Iron Skillet Weigh? (17 Examples)

You already know that cast iron skillets weigh between 4 and 12 pounds, but what are the exact weights of the most popular options on the market?

In the list below, you’ll find the 17 most popular cast iron skillets compared by weight, size, and brand. I’ve also provided links so you can check out these skillets on Amazon and see what customers are saying about them.

Note: To ensure this list is 100% accurate, I confirmed the weights across multiple retailers and on the manufacturers’ websites. In cases where the weight wasn’t listed online, or various retailers had differing weights listed, I contacted the manufacturer for confirmation.

Weight of Cast Iron vs. Stainless Steel and Aluminum

If you do any cooking at home whatsoever, you likely own a few stainless steel and aluminum skillets, so you’re familiar with their weight and maneuverability.

To give you a better idea of how the weight of a cast iron skillet will feel compared to other cookware you already use regularly, below is a quick list of the size and weight of 12 popular stainless steel and aluminum skillets/pans.

Why are Cast Iron Skillets So Heavy?

Most people believe that cast iron skillets are so heavy because iron is denser than steel, but that myth is not true.

The density of steel and iron varies based on the specific combination of alloying elements within a given sample, but, in general, they both have the same density at around 7,850 kilograms per cubic meter.

What Is the Best Size for a Cast Iron Skillet?

I often get asked: what size cast iron skillet is best for everyday use?

If you’re looking to buy just one cast iron skillet, the best size is 12 inches. A 12-inch skillet is big enough for large steaks, burgers, and other meats, but it’s still small enough to fit on most burners and to store in cabinets.

My recommendation is the Lodge 12-inch skillet. Lodge is the leading cast iron cookware company in the U.S., and they’ve been making cast iron skillets since the 1800s! Don’t just take my word for it; this skillet has thousands of positive reviews on Amazon. Check out my in-depth review of Lodge cast iron skillets to learn more.

If you typically cook for only 1 or 2 people, a 10-inch skillet might be a better option (Lodge makes one that size too). It’s still big enough for most meals but is significantly lighter (5 pounds vs. 8 pounds) and will take up less space.

Of course, the best size for a cast iron skillet is entirely up to you, and if your an avid home cook, it might make sense to have a few different sizes around the kitchen (assuming you have room to store them).

Cast iron skillets are known for their durability, cooking performance, and, as you now know, their heft.

If you’re concerned that you won’t be able to handle a heavy skillet regularly, I highly recommend the Victoria 10-Inch Cast Iron Skillet (see on Amazon). It’s the lightest 10-inch cast iron skillet on the market at just over 4 and a half pounds. Also, it has an extra-large main handle and an extra-wide helper handle, which makes it easy to maneuver safely with two hands.

If you think cast iron skillets are heavy, you should check out our recent article about how much cast iron bathtubs weigh!