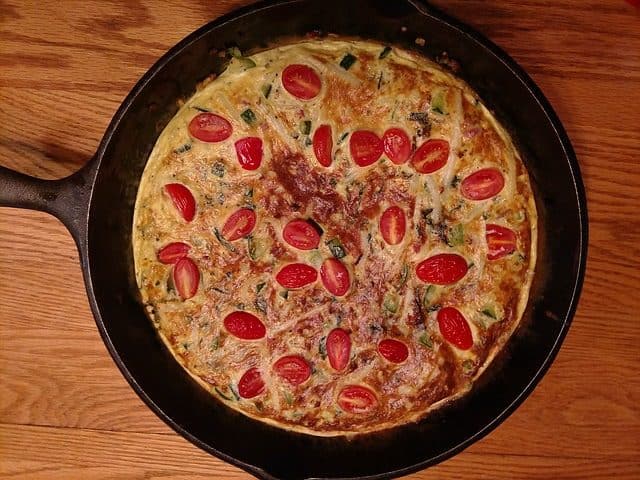 In this article, I explain exactly how to use a cast iron skillet, including the proper seasoning, cooking, cleaning, and maintenance techniques.

Learn the advantages and disadvantages of cooking with cast iron skillets.

Let’s dive right into it!

Use the links below to navigate this guide:

Cast iron skillets have been used for thousands of years and remain popular in kitchens across the world, including mine. I purchased my cast iron skillet about five years ago, and I use it at least a couple of times a week. I love it!

But what is it that makes cast iron skillets so special? In short, they are versatile, durable, and hold heat exceptionally well, resulting in really delicious meals with low effort.

In this article, we’ll cover each of these characteristics in detail and explain how to properly season, cook, and clean your cast iron skillet.

Many of the recipes that I’ve used lately call for searing meat on the stove, followed by roasting it slowly in the oven. Cast iron skillets are perfect for this type of cooking.

Cast iron has an extremely high capacity for heat. It can withstand up to 1500 Degrees Fahrenheit. You can use them on the stove, in the oven, on the grill, or over an open flame (great for cooking over a campfire). You get the ease of non-stick with the browning and searing performance of premium stainless steel cookware like All-Clad (see our article Is All-Clad Worth It? To learn more about stainless steel cookware).

Pick up a cast iron skillet, and you will feel the strength in its thickness and weight. It will last a lifetime and often gets passed from one generation to the other while remaining as effective as it was on day one. There is virtually no way to damage or break it. There is a possibility of rust forming, but if that happens, you can rinse and scrub it off pretty easily.

Cast iron is an extremely dense material. Due to its density, it heats up slower than most cookware, but once heated, it retains its temperature for a long duration.

It is manufactured from one piece of iron, resulting in even heat distribution and consistency in performance. If you want to test out the heat distribution yourself, touch the handle after its been on the stove for ten minutes (spoiler: you’ll burn yourself so don’t do that).

Cast iron is a relatively inexpensive material; therefore, cast iron skillets are affordable. Lodge, the most well-known brand, has been manufacturing cast iron cookware in the United States since the 1800s. You can check out their current prices on Amazon or read my in-depth Lodge cast iron skillet review to learn more. They offer many different sizes to fit your needs.

How to Properly Season a Cast Iron Skillet

Seasoning your skillet adds a protective layer to the surface, transforming the texture from rough and harsh into smooth and non-stick.

Most new cast iron skillets come from the manufacturer unseasoned. Make sure you season before you cook with it for the first time. If done correctly, you won’t need to season it too often. Keep an eye on the coating, and if you see it starting to wear out, repeat the seasoning processes.

Some people get intimidated by the idea of seasoning, but the steps couldn’t be more simple.

Step 1: Scrub the skillet with hot water. Do not use soap. If you have used the skillet before, make sure to remove all small bits of food.

Step 2: Dry it thoroughly. This step is critical. Water can create rust, and you don’t want that.

Step 3: Spread a thin layer of vegetable shortening all over the skillet, including the cooking surface, sides, bottom, and handle.

Step 4: Place the skillet cooking side down on top of a piece of foil in a preheated oven at 350 degrees Fahrenheit. Bake it for an hour or two and let it cool in the oven. The heat from the oven locks in the protective layer.

Martha Stewart does a great job demonstrating the art of seasoning a cast iron skillet in this video.

How to Properly Cook With a Cast Iron Skillet

As I’ve mentioned, a cast iron skillet is exceptionally versatile. Use it on any stovetop, including gas, induction, or glass. Use it to roast or bake in the oven. You can even use it on your grill outside. You can also use it to fry chicken, french fries, and whatever else you please.

In my opinion, they work best for meals that require the sear-to-roast technique like a juicy ribeye steak or pork chop.

One of my favorite one-pan meals is bone-in chicken thighs with vegetables. Brown the skin-side of chicken thighs, flip them over, add Brussels Sprouts, red onions, and potatoes. Pop it in the oven for 40 minutes, and you get a delicious meal with minimal cleanup.

Cast iron heats slowly, be patient, and wait a few minutes after you’ve turned on the heat before adding your food. It cools down slowly, so after you’re finished cooking, let it sit on the stove for 30 minutes before cleaning.

Food That You Should NOT Cook in Your Cast Iron Skillet

Cast iron skillets are great for most cooking, but there are two types that you should avoid cooking in it.

Acidic foods – There are two reasons to avoid cooking acidic foods in your cast iron. First, the acid can erode the non-stick coating (seasoning) that is so crucial to cooking with cast iron. Secondly, high acidity can cause tiny molecules of metal from the skillet to break off and mix into your food. This is harmless for your health but can create an unpleasant, metallic flavor. Gross. Mixing in a few tomatoes or a squeeze of lemon juice won’t hurt, but avoid cooking tomato sauce or deglazing your skillet with vinegar.

Fish – I made this mistake and will never make it again. One would think that a cast iron would be perfect for fish, especially a fish like salmon that calls for the sear-roast technique. The problem is, cast iron skillets have a porous surface, even when properly seasoned, and can start taking on the flavor of the food. Unless you reserve one of your skillets for fish only, I recommend using your stainless steel pans.

How to Properly Clean a Cast Iron Skillet

Cleaning your cast iron skillet is a simple and easy process. If you follow these tips, you will avoid rust, maintain your seasoning, and be able to enjoy your skillet for many years.

Cast iron skillets maintain their heat longer than most cookware, so make sure it is cool enough to handle before cleaning.

Tip 1: Do not shock it with cold water right after cooking, that can cause warping.

Tip 2: Cast iron skillets should be washed by hand only. Do NOT put it in a dishwasher

Tip 3: Use only hot water and a sponge or stiff brush made for cast iron like this one (link to Amazon). Soap and abrasive brushes like steel wool will remove the seasoning. If you feel like you need to use soap or steel wool, be aware that you will need to re-season it before you cook again.

Tip 4: Remove stubborn food by creating a paste of water and kosher salt. If that doesn’t do the trick, heat the skillet on the stove at a low temperature, as it becomes warm the bits of food should loosen up and come off with a bit of elbow grease. Do NOT soak it in water; it will rust.

Tip 5: Once it is clean, dry it thoroughly to avoid rusting.

Tip 6: Rub a light layer of shortening on the cooking surface before putting it away.

As great as cast iron skillets are, don’t throw away the rest of your cookware yet. There are some disadvantages that you should know.

It’s heavy – Lodge’s 12-inch skillet weighs 8 pounds, and the 15-inch weighs 11.5 pounds. Add food, and that can get pretty heavy. They typically have a tiny handle, so make sure you’ve got two hands on it when taking it out of the oven. If weight is a concern, I recently published an article outlining the weight of the top 17 most popular cast iron skillets. The good news—you can find ones that are much lighter than 8 pounds.

Seasoning it can be annoying – As I outlined above, it is easy to season, but it does take time, a few minutes to prepare and then an hour or more in the oven.

It can develop rust – Unlike most cookware materials, cast iron is susceptible to rust. If you soak it (don’t do that) or leave water droplets on it, you’ll get some rusting. It’s easy to wash off but annoying and unsettling to see rust on a surface that you use to cook food.

It’s easy to burn yourself – Since cast iron skillets are made with one piece of metal, the handle gets extremely hot. I learned my lesson after getting burned a few times grabbing the handle without an oven mitt. Big mistake. Always use oven mitts when handling your skillet.

It’s not the best for sauteing – One cooking technique it is not great for is sauteing. Even though the seasoning makes it non-stick, the weight and hot handle make it challenging to maneuver. Stick to your regular non-stick pans for sauteing and stir-frys.

Your cast iron skillet is not meant to replace your standard cookware. It is an excellent addition to many types of meals and is especially effective at cooking at high temperatures and recipes that call for multiple cooking techniques like sear-and-roast or brown-and-braise.

If you’re not sure where to start with your cast iron skillet. These are my top five favorite recipes. I’ve made these over and over for my family and guests, and they never disappoint.

Epicurious – One Skillet Chicken With Orzo

What Are You Waiting For? It’s Time to Cook!

Now that you know how to use your cast iron skillet properly, it’s time to start enjoying it. If you still don’t have a cast iron skillet of your own, I highly recommend the leading brand, Lodge, which has been making cast iron cookware in the US since the 1800s. They are very affordable, and you can check their current pricing on Amazon at this link.

Let us know your favorite recipes in the comments below or send them directly to us, and we’ll add them to this article.

In cooking mode? Check out these articles about popular cooking products: