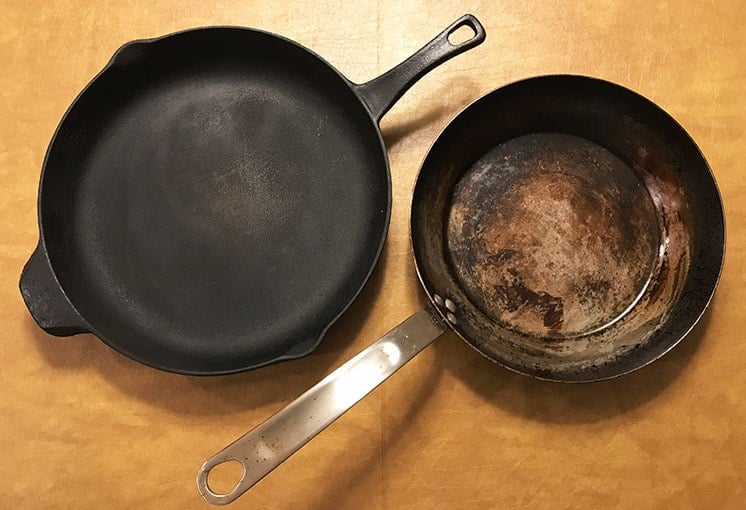 Are you shopping for a new skillet but can’t decide between carbon steel and cast iron?

Are you wondering what the difference is between these two cookware types?

In short, cast iron cookware is thicker and heavier. It heats up slower but retains heat better. Carbon steel has thinner walls, making it easier to maneuver. It doesn’t retain heat as well as cast iron, but it responds to heat much faster, giving you more control.

In this comparison of carbon steel vs. cast iron cookware, I dive much deeper into the differences.

You’ll learn how they compare in terms of cooking performance, ease of use, maintenance, durability, and much more.

By the end, you’ll know the 10 key differences, so you can decide which is the best option for your needs.

Use the links below to navigate:

Let’s kick off by reviewing the differences between carbon steel and cast iron cookware.

It may seem strange due to its name, but cast iron actually has more carbon content than carbon steel.

Carbon adds strength to the alloy, but it also makes it more brittle. Because of this, cast iron skillets are made with thick walls by pouring the melted iron and carbon mix into molds.

With lower carbon content, carbon steel is more ductile than cast iron, meaning it can bend without breaking.

To make carbon steel skillets, manufacturers roll out sheets of carbon steel, cut the dimensions, and bend the sides into shape. This forging process results in cookware that’s thinner and less bulky.

Since cast iron skillets are made in molds, the skillet and handle are all one piece. In most cases, the handle is short, just long enough for one hand.

Cast iron skillets are much heavier than carbon steel, thanks to their thick construction.

Cast iron skillets weigh between 4 and 12 pounds, but the actual weight varies by size. A standard 12-inch skillet weighs 8 pounds, while most carbon steel skillets weigh around 4 pounds.

As such, carbon steel cookware is easier to handle and offers better maneuverability.

The heavier cast iron is also more likely to damage counters and stovetops.

To give you a better idea of the difference in weight between cast iron and carbon steel cookware, here are a few examples:

However, they each have their own set of strengths and weaknesses.

Since carbon steel skillets are lighter, smoother, and have longer handles and flared sides, they’re better for stovetop meals that require a lot of manipulation. This includes scrambled eggs, stir fry, and sautéed vegetables.

With their shorter handles, steeper sides, and superior heat retention, cast iron skillets are better for baking in the oven. For example, pizza, cornbread, and pies are much better suited for cast iron.

Another significant difference between carbon steel and cast iron is the type of cookware available.

When most people think of cast iron, they think of the bare, black skillets. But several cookware brands offer enameled cast iron cookware, too.

Enameled cast iron cookware is made just like regular cast iron, but it’s finished with several coats of smooth material, making it resistant to rust and corrosion without the need for seasoning.

The most famous example is Le Creuset. The company’s famed enameled cast iron Dutch ovens are used in millions of kitchens globally.

Carbon steel and cast iron both retain heat well, but cast iron is the clear winner in this category.

As I mentioned, cast iron skillets are made with thick walls to counteract brittleness. These thick walls have another advantage; they absorb heat and hold onto it really well.

Heat retention is important for a few reasons.

First, when you put a cold piece of meat on a hot skillet, the cookware’s temperature drops. With cast iron, that drop in temperature is minimized due to the heat retention of its thick walls. As a result, you can get a nice crispy sear and lock in the juices.

Secondly, cookware with good heat retention keeps food warm, even after you turn the burner off. This comes in handy when you’re entertaining or preparing a multi-course meal.

In truth, carbon steel has excellent heat retention, too. But, because the construction is thinner, it cools down faster than cast iron.

The responsiveness of a pan or pot refers to how quickly it responds to changes in temperatures. Carbon steel is thinner than cast iron and, as a result, heats up and cools down faster.

Responsiveness is important when you’re making stir fry, fried rice, or one-pan meals. You can adjust the heat frequently without risking over or undercooking.  This is great for cooking fish, eggs, and other delicate ingredients that tend to overcook when the temperature gets too high.

Cast iron is one of the least responsive cookware types. Due to its thick construction, it takes a while to heat up, and when you turn the heat down or off, it takes a long time to cool down.

If you’re cooking a meal that requires several changes in heat, or you’re in a hurry, avoid cast iron.

Be prepared for some discoloration after multiple uses if you’re using carbon steel. It can turn blotchy and begin to look unappealing.

However, the rusting does not mean the cookware can no longer make delicious food — your pans will work as well as it did before they started to change color.

It’s also possible that preparing acidic food or using too much oil for seasoning can result in discoloration.

Cast iron, however, is more resistant to rust when taken care of properly. To prevent rust spots, make sure to dry your cast iron cookware thoroughly. If they do occur, try to remove it with a mild abrasive. Make sure to keep it well-seasoned at all times.

On the other hand, cast iron has a rough and bumpy texture, thanks to its higher carbon content.

This uneven surface grips food, maximizing the surface contact and making it the perfect cookware for searing meats.  However, it may not be the best texture for sliding eggs and flipping pancakes.

Carbon steel and cast iron cookware have been around for quite some time.

Due to its ease of use, rugged performance, and constant praise from celebrity chefs and cooking shows on TV, cast iron has surged in popularity worldwide—especially in the last 15 years.

Carbon steel is a favorite among professional chefs, but most home cooks haven’t caught on to its benefits the way they have with cast iron—at least not yet.

If you do a quick search on Amazon, the difference in popularity is apparent. Cast iron skillets rack up tens of thousands of reviews, while the numbers are much lower for carbon steel skillets.

Despite their differences, carbon steel and cast iron skillets have a lot in common.

Let’s take a quick look at all the ways they’re similar.

Both carbon steel and cast iron skillets show versatility in both the ingredients and cooking techniques they can handle.

Most ingredients are suitable for both carbon steel and cast iron cookware, and you can use them on the stove, in the oven, under the broiler, and on the grill. They’re the ideal cookware for campfires, too.

Below are the current prices on Amazon for the top-selling carbon steel and cast iron skillets:

Product prices and availability are accurate as of the date/time indicated and are subject to change. Any price and availability information displayed on [relevant Amazon Site(s), as applicable] at the time of purchase will apply to the purchase of this product.

Prices pulled from the Amazon Product Advertising API on:

One of the greatest advantages of carbon steel and cast iron cookware is that they’re both extremely durable. They’re nearly indestructible. Unlike non-stick pans that only last a few years, this type of cookware can last a lifetime.

Stainless steel and non-stick pans are usually oven-safe up to 450°F or 500°F.

With carbon steel and cast iron, you never have to worry about temperature restrictions. Both boast incredibly high heat tolerance.

It’s why these materials are often used in high volume professional kitchens; they can sit on the burners for hours without overheating or warping.

Made In carbon steel cookware is oven-safe up to 1200°F, and the ICON carbon steel pan can handle heat up to 800°F. Most cast iron skillet makers don’t even mention a maximum safe temperature because they can tolerate a much higher temperature than your oven is capable of reaching.

Seasoning is the process of coating the cookware in fat, typically vegetable oil, lard, or shortening, and heating it so that the fat bonds to the surface, creating a protective non-stick layer.

Although the seasoning process is simple, and you only need to do it on occasion, it’s a necessity for both carbon steel and cast iron. If you skip it, the pan will rust and corrode, and food will stick to the surface.

Carbon steel and cast iron skillets are not dishwashers safe. Both need to be hand-washed with water and a gentle sponge. Soap, harsh scouring pads, and stiff bristle brushes will remove the layer of seasoning.

After you clean the skillet, you’ll need to dry it thoroughly because carbon steel and cast iron are both susceptible to rusting with even the tiniest exposure to moisture.

Carbon steel and cast iron are both reactive, meaning the metals interact with acidic foods.

Trust me, I’ve tried it, and you can see the results below.

Carbon steel and cast iron are kind of like cousins. They’re both made of iron and carbon, and they’re both versatile, durable, and affordable.

But they also have many notable differences.

So, the question is: should you buy carbon steel or cast iron?

If you’re a serious chef, buy both. Although there’s significant overlap, there’s much you can do with one that you can’t with the other. Plus, both are relatively inexpensive.

If you don’t have the storage space for both or want to simplify your cookware, I recommend cast iron.

It’s easier to maintain and doesn’t discolor and rust as easily as carbon steel. It is excellent for searing, stove-to-oven recipes, and baking, too.

When I need cookware that is non-stick or more responsive, I’ll grab my stainless steel or non-stick hard-anodized aluminum pans.

Regardless of which option you choose, you’re in for a great experience.

For cast iron, I recommend Lodge, which you can find on Amazon, or learn more about in my in-depth review.

For carbon steel, I recommend Made In, which you can find on MadeInCookware.com. Also, check out my in-depth review to learn more.