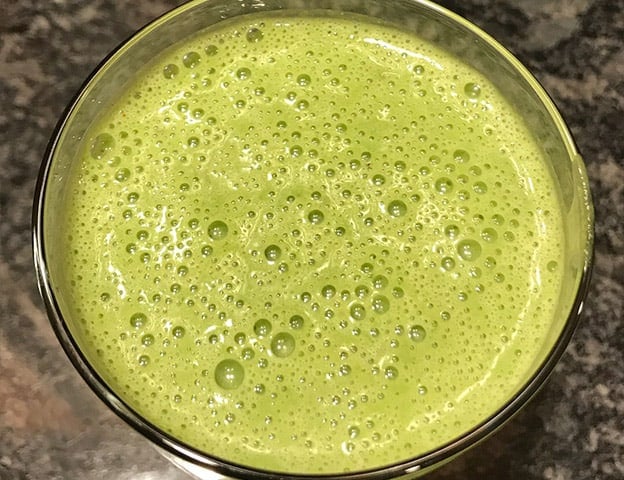 Are you shopping for a new blender but can’t decide between Vitamix and Cleanblend?

With a proven track record of nearly 100 years, Vitamix blenders are the total package. They’re powerful, precise, and durable. But they have one major downside — they’re incredibly expensive.

Cleanblend doesn’t have the history or reputation of Vitamix, but its blenders are just as powerful, built to last, and come with an affordable price tag.

So, should you splurge on a proven industry leader? Or save some cash and go with the unproven newcomer?

In this comparison of Cleanblend vs. Vitamix, I’ll help you make the best decision for your needs. You’ll learn how these two blender brands compare in terms of power, precision, features, price, warranties, and much more.

Use the links below to navigate:

If you only have a minute, below is a quick side-by-side comparison of Cleanblend vs. Vitamix.

One significant difference between Vitamix and Cleanblend is each company’s history and track record.

You can’t talk about blenders without mentioning Vitamix. The company began in 1921 and, since then, has become the most well-known brand in high-performance blending.

The success traces back to its early years when Vitamix became the first company in 1950 to produce and broadcast a product-specific infomercial on television.

Today, the brand is still owned by the fourth-generation of the Barnard family, who continue to fulfill Vitamix’s mission of nourishing the zest of life.

If you are an environmentally conscious person to get more whole foods into your diet, then the Vitamix story will speak directly to you.

While Vitamix is about to hit its 100th birthday milestone, Cleanblend is a newer brand on a mission to build its reputation and loyal customer base.

Cleanblend began after its founders Doug Hall and Alex Podell saw a clear need in the market for a powerful, commercial-grade blender that wouldn’t break the bank. They spent a year and a half working with experts to create their blender in the hopes of promoting a cost-effective way of eating healthy.

While the brand only began in 2013, Cleanblend has gained some attention from reviewers and the press. Forbes included it in their Best Blender Roundup in 2018, and the blender even made an appearance on the Ellen Show and in the Chicago Tribune.

Now that you know a bit about both brands’ history, let’s take a look at the different blender options each company offers.

One of Vitamix’s main draws is that it offers a container for every blend, including 32-ounce, 48-ounce, and 64-ounce sizes.

If you’re blending in small batches, you can purchase Vitamix’s smaller blending cups, which hold up to 20-ounces. If you regularly use your blender to prepare dips, baby food, or smoothie bowls, then the 8-ounce blending bowls are an ideal add-on. 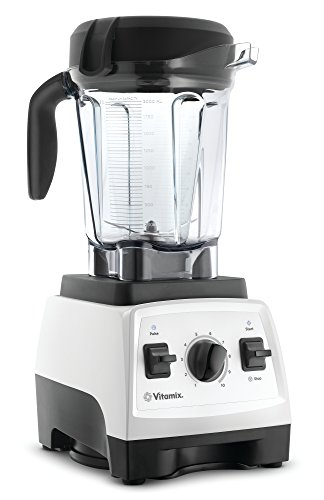 The Legacy Series, also known as the Classic Series, boasts a simple design and is compact enough to sit on your kitchen counter. Although it lacks some of the bells and whistles you get with other Vitamix series, it provides plenty of power, exceptional performance, and simple, intuitive controls.

Within this series, Vitamix offers several different models, including:

The Explorian Series is much like the Legacy Series. It’s packed with power and has simple controls.

The main differences are that it comes with a compact 48-ounce container (as opposed to 64-ounce), perfect for blending smaller batches, and a lower price tag.

It’s not cheap, but it’s the brand’s lowest-cost option, and they market it as the “entry-level” Vitamix. Currently, there is only one model in this series, E310 (view on Amazon).

The Ascent Series kicks it up a notch. Although this is Vitamix’s most expensive series, these blenders come with all the high-end features you could imagine, including a digital display, touch screen, up to five pre-set programs, and wireless connectivity.

These high-tech blenders can automatically detect the container size and stop the blending program precisely when it’s ready. Additionally, you can use Vitamix’s Perfect Blend App to send up to 17 programs from your phone to the blender. There’s a great video that explains this app on Vitamix.com.

Within this series, Vitamix offers several different models, including A2300, A2500, A3300, A3500. As the number within the name goes up, so do the price and features. You can check them all out on Amazon.

Recently, Vitamix has released its first Immersion blender that is less than half the price of their cheapest traditional blender. It’s the perfect choice if you prefer the flexibility of hand-held blending. 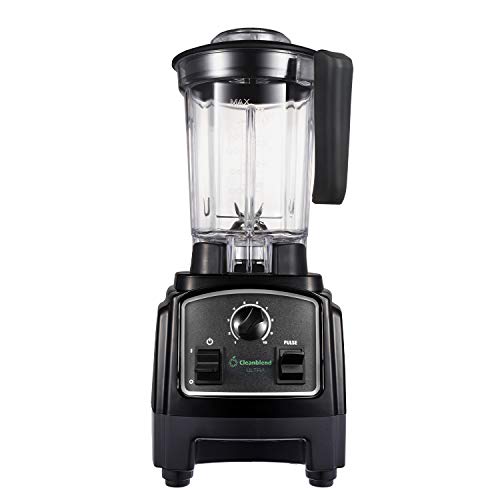 If you want lots of options and a proven history, then Vitamix is the best choice.

If you get overwhelmed by too many options and want a simple no-fuss blender that will get the job done at an affordable price, then Cleanblend might be the right choice for you.

When it comes to power, Cleanblend packs more punch.

Cleanblend markets its blenders as having “unrivaled commercial-grade performance.” Both the Classic and Low Profile blenders utilize a 3-horsepower (HP) motor.

For Vitamix, the power of its blenders varies slightly across their series. The Legacy and Explorian Series include a 2 HP motor, while Ascent Series blenders have a 2.2 HP motor.

Although Cleanblend’s motor technically has more horsepower than Vitamix, both are incredibly powerful blenders.

These blenders aren’t just for making smoothies. Both Cleanblend and Vitamix are powerful enough to pulverize and liquify just about anything. From hot soups and batters to your favorite dip or nut butter, these blenders can handle it.

These are not the kind of blenders you would pick up at your local grocery store or on clearance at a department store. They are high-powered and commercial grade.

For example, I recently used the Vitamix A3300 to make a delicious batch of almond butter. Nut butter is nearly impossible to make with a standard blender, but it took about two minutes with Vitamix.

So, if you want the most powerful blender, go with Cleanblend. But know that Vitamix is incredibly powerful, and there’s virtually nothing that the Cleanblend can handle that Vitamix can’t.

If you plan on using your blender for an array of dishes, you need one with multiple settings.

The number of settings available on Vitamix blenders varies by series:

Like the Vitamix options, both the Classic and Low Profile blenders offered by Cleanblend have a 1-10 speed variation and a pulse switch.

If you want to be able to keep your finger on the pulse (literally!), then Vitamix’s Ascent range offers the most functionality when it comes to settings. Whereas the Cleanblend and the other Vitamix models are comparable for their settings options.

If you’re looking for a blender to meet the latest technology, Vitamix is the way to go.

The Vitamix Legacy and Explorian Series are relatively basic, but the Ascent Series has a bunch of extras, including:

Cleanblend blenders lack extra features and are more like the Vitamix Legacy Series. These blenders are limited to their variable speed control and pulse features.

While the Ascent blender from Vitamix carries a larger price tag, it comes with significantly more bells and whistles than you get from the Cleanblend.

These extra features are worth the additional cost for some people, but others just want a powerful blender without the upgrades.

It’s up to you to decide what is best for your kitchen.

Vitamix and Cleanblend are built to withstand rigorous daily use and come fitted with mechanisms to prevent overheating. In fact, Vitamix blenders are known to last upwards of 30 plus years.

For added reassurance and peace of mind, both Vitamix and Cleanblend offer warranties. However, the Vitamix warranty is twice as long as Cleanblend.

Here are the facts detailing both company’s warranties:

Vitamix blenders are significantly more expensive than Cleanblend. So, if you’re on a budget, Vitamix might not be the best option, or you may want to consider the slightly lower cost Legacy Series (which is still pricey).

If you are interested in the extra functionality offered by a Vitamix, but you’re on a budget, the brand offers a series of certified reconditioned blenders.

These blenders are refurbished by hand and meticulously inspected to meet the standard required for freshly manufactured blenders.

For ease of comparison, I’ve created the chart below, showing the current prices of Cleanblend and Vitamix’s best-selling blenders.

Product prices and availability are accurate as of the date/time indicated and are subject to change. Any price and availability information displayed on [relevant Amazon Site(s), as applicable] at the time of purchase will apply to the purchase of this product.

Prices pulled from the Amazon Product Advertising API on:

What Others Are Saying

Here are a few of the talking points around Vitamix:

Wirecutter at the New York Times rated the Vitamix 5200 as the Best Blender. They applauded Vitamix for blending “more gracefully than any of the others we’ve tested.”

Forbes named the Professional Series 750 Blender the Best High-End Blender on the Market. The reviewers rated Vitamix highly for its “durability, versatility and high power.”

While Cleanblend has received significantly less press, there are some exciting few talking points worth acknowledging:

Forbes added Cleanblend to its Best Blender List. The reviewers focused on the motor’s power and claimed it is just as strong as Vitamix.

The Chicago Tribune compared the Cleanblend as having “power equal to a Vitamix”.

Bottom Line: Should You Buy a Vitamix or Cleanblend Blender?

Cleanblend is a straightforward, reliable blender. It has enough power and features to get the job done, but the best part is its low price. It’s significantly less expensive than Vitamix.

That said, Vitamix is in a league of its own. With more settings, programs, and convenient wireless connectivity, its performance, precision, and convenience can’t be beaten. Not to mention, Vitamix’s warranty is twice as long.

Although Vitamix is quite pricey, you’re paying a premium for the unique features and the brand’s heritage and reputation.

With Cleanblend, there are still unanswered questions surrounding its long-term durability since it’s only been around since 2013.

Bottom line — if you want the best performing blender from the most trusted brand in the business and can afford it, go with Vitamix. If you want a high-quality, super powerful blender that’s easy to use and won’t break the bank, Cleanblend is an excellent option.

Both brands are available on Amazon, where you can read dozens of other reviews and check out the current pricing.