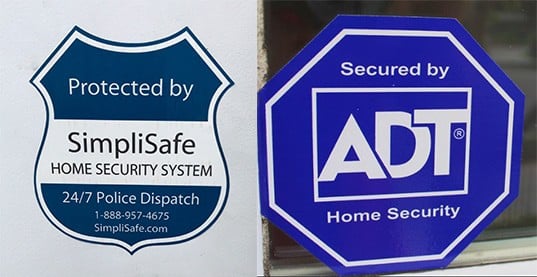 In the market for a home security system and trying to decide between SimpliSafe and ADT?

In this article, I provide a detailed comparison of SimpliSafe vs. ADT and dive deep into the similarities and differences. By the end, it’ll be clear which home security system is best for you.

If you want to compare the price of SimpliSafe and ADT, check out SimpliSafe on SimpliSafe.com or call ADT for a free quote (855-447-0762).

Overview of SimpliSafe and ADT

Here are the high-level facts about each company that you need to know:

SimpliSafe is a relatively new company focused on innovation, transparency, and ease, while ADT has been around for over a century and prides itself on its legacy and scale.

SimpliSafe was founded in 2006 by two Harvard Business School classmates. They launched their first product in 2009 and grossed a little over a million dollars in the first year. Since then, they’ve grown exponentially and have taken on investment from high profile venture capital firm Sequoia Capital.

In early 2018, they released the third generation of SimpliSafe, which features smaller and sleeker sensors and updated features. They brand themselves as the modern innovative home security company and appeal to busy professionals with their fast and straightforward do-it-yourself installation, hence the name SimpliSafe.

ADT’s history is quite the opposite of SimpliSafe. It was founded over 140 years ago in 1874. It started as a telegraph-based alert system and evolved over the decades to become the largest home security company in the United States and Canada.

ADT has gone through several mergers and acquisitions and, most recently, was bought in 2016 by Apollo Global Management for almost 7 billion dollars. They still operate under the brand ADT. They use their legacy and scale to brand themselves as the most trusted security company.

SimpliSafe gives you two ways to choose your system. You can decide to build it yourself by picking exactly what sensors, monitors, detectors, and alarms you need. Or, if you’re not exactly sure what you want, they offer packages that include unique options based on typical customers’ needs.

Every SimpliSafe system starts with a Wireless keypad, which is what you use to control the system and a Base Station, which connects each component and communicates with the monitoring centers.

SimpliSafe offers the following to build your system:

Similar to SimpliSafe, ADT offers packages that include all the basics like a keypad, motion detectors, door and window sensors, glass break sensors, keyfob with a panic button, and more.

The Traditional package includes the following:

The Control package includes everything in the Traditional package plus:

The Video package includes everything in the Traditional and Control packages plus you can view live video from your security cameras on your phone. You can also playback clips of the moments that your sensors are alerted.

With SimpliSafe, you can go directly to their website, build a package, and see the price of each component right in front of you (see a screenshot from SimpliSafe.com below). You buy and own the equipment for life.

When you got to ADT.com and try to see pricing for each package, you get a message that asks you to fill out a form to be contacted.

ADT requires you to schedule an appointment with a rep who will come to your house, assess your situation, and provide a quote for the package they recommend. The pricing depends on the package you choose and the needs of your home.

Unlike SimpliSafe, which is sold direct to consumers, ADT systems are sold through independent dealers. These companies are contracted to sell and service ADT. You can find out who the dealer is closest to you on ADT.com.

The dealers are compensated based on sales, so, as you can imagine, once they get in your house, they sell aggressively and make it difficult to say no. In most cases, this is not a problem, but like any product sold through independent dealers like this, your experience will depend on the particular dealer you get.

One of the most significant differences between SimpliSafe and ADT is how each system is installed.

SimpliSafe is a do-it-yourself installation. It comes with a USB drive that gives you very clear, step-by-step instructions on how to install. Every component is wirelessly connected, so there is no electrical work necessary. Depending on the number of sensors and monitoring devices, it can take from 20 minutes to an hour to install.

ADT is installed by professionals. When you purchase the system, they will schedule an installation appointment. It usually takes two to three hours, depending on the package you are buying and the size of your home. The installer will be able to explain how everything works in detail and answer any questions you have. Despite being less convenient, with ADT, you get a personal touch that you don’t get with SimpliSafe.

The one really interesting advantage for ADT is that they can plug their monitoring into an existing home security system. So if you move into a house with a system from another company installed, you can set it up with ADT monitoring.

With SimpliSafe, you have more flexibility. You have the option of not having monitoring at all. If you decide to not pay for monitoring, your sensors will set off the siren to alert you and hopefully scare off intruders, but the system will not contact the monitoring center or authorities.

If you decide to purchase monitoring from SimpliSafe, you have two options.

A significant advantage of SimpliSafe is that they don’t require you to commit to a contract. You can cancel the monitoring service at any time with no issues.

To accurately compare pricing between SimpliSafe and ADT, you have to look at the short and long-term costs and also consider the cost of equipment, installation, and monthly monitoring fees.

Equipment – The cost of equipment depends entirely on what you get. Systems start at $200 but could easily run you over $600, especially for homes over 2000 square feet. On average, customers invest about $500 in equipment. You have the option to save 25-30% by purchasing certified refurbished equipment on SimpliSafe.com.

Installation is free since you are doing it yourself.

Monitoring – $14.99 per month for standard monitoring and $24.99 for Interactive monitoring.

In general, the upfront cost of ADT is less than SimpliSafe. There is technically no equipment cost because, with ADT, you are either using existing equipment or leasing it from them. Unlike SimpliSafe, ADT charges a set-up fee.

ADT offers three packages, the Traditional, Control, and Video. With each package, you can add features and customize it to fit your exact needs, but be aware that the activation cost can increase will each addition.

Although the prices are not significantly different, consider that you will likely be in your home and want to have home security for more than 3 years. Because of the higher monthly fees, SimpliSafe is the clear winner in price.

SimpliSafe is an up and coming home security company that prides itself on taking the complexity and stress out of home security.

SimpliSafe has some disadvantages that you should be aware of, such as:

ADT is the Goliath in the home security space and has built its strong reputation over 140 years in the business.

Here are the advantages of ADT:

ADT also has some disadvantages, such as:

Verdict: Which Home Security Option Is Best for You?

Both SimpliSafe and ADT are always innovating and coming out with new products and services, but their core offerings are very similar. The differences are in how you buy (yourself online vs. talking to a rep), how it is installed (DIY vs. professional), monitoring contracts (low cost without contracts vs. higher cost with contracts), and long-term price.

If you are comparing purely on price and can afford to pay around $500 upfront for equipment, SimpliSafe will save you a lot in the long run due to their low monitoring fees.

If the price is not as important, SimpliSafe is an excellent option for people who are comfortable setting up the system themselves. ADT is best for those who would rather have a professional do the work.

Personally, the price was the most significant factor, so I decided to go with SimpliSafe. If you want to learn more about my experience with the system, check out my in-depth review of the pros and cons of SimpliSafe. Whichever one you choose, you’ll be getting a high-quality system that will keep your family safe, and that’s the most critical part.

If you are interested in purchasing either SimpliSafe or ADT, use the links below. SimpliSafe is available directly through their website or can buy packages on Amazon. ADT is only sold through dealers, so you will need to set up an appointment.

The information in this post was based on my own research and experience buying a home security system. These are the sources that helped the most:

2 thoughts on “SimpliSafe vs. ADT: Which Security System Is Better?”