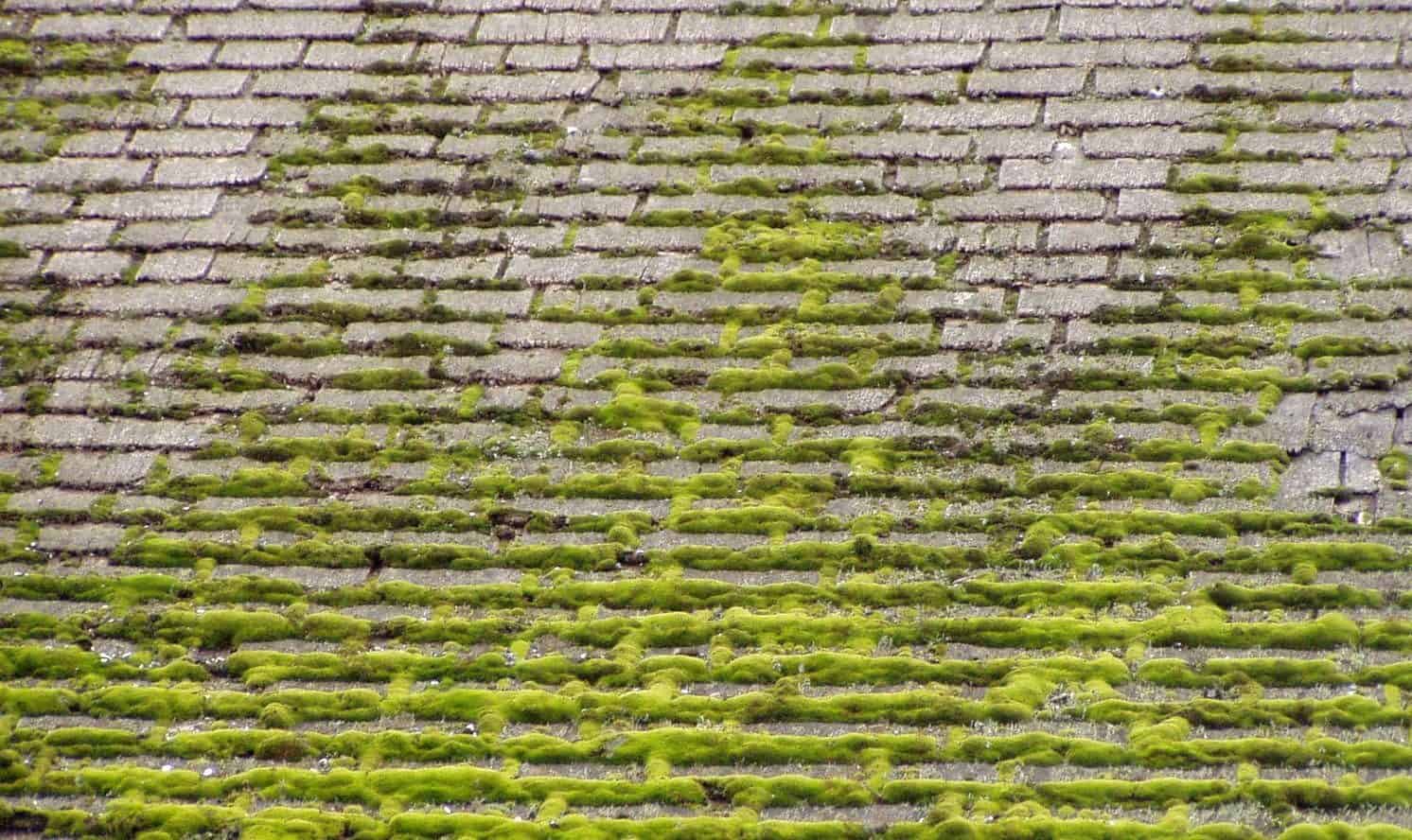 If you notice something green and fuzzy growing around the edges of your roof’s shingles, you might be wondering:

Why is moss growing on my roof?

Moss thrives in cool, damp environments. If you have moss on your roof, it’s likely because your roof is shaded by trees or other structures, allowing moisture to linger and moss to grow.

Moss is a non-vascular plant that absorbs water through its leaves instead of roots. Its seeds, called spores, are tiny one-celled reproductive units that become air-borne and make their way onto roofs via wind, birds, squirrels, and other small animals.

Once the spores get on the roof, they gather in the spaces between shingles and grow into thick spongy moss.

Since moss thrives in damp environments, areas of the roof that get the least amount of direct sunlight, like north-facing sections or areas shaded by tree limbs, make an ideal place for it to grow.

Once moss establishes itself, it absorbs rainwater like a sponge and can spread across the entire roof and grow a few inches thick.

Besides roofs, moss grows on just about any surface, including trees, rocks, fences, and roofs.

Can Moss Damage Your Roof?

So what’s the big deal? A little moss can’t cause any damage, right? Wrong.

A small amount of moss is harmless, but if it’s left untreated, it can cause significant damage and degrade the structural integrity of your roof.

As I mentioned before, moss typically grows in the cracks between each shingle. As it grows thicker, it lifts and loosens shingles and allows water to leak through.

Also, moss absorbs water when it rains and retains it for long periods, which can lead to mold, bacteria, and the decay of the roof’s framing over time.

How to Remove Moss From Your Roof

Clearing the moss from your roof is easy and only takes a few simple steps.

Instead of making your own solution, there are specially formulated moss killers like the Wet and Forget Moss Remover (link to Amazon) or the Bayer 1-in-1 Moss and Algae Ready-to-Spray bottle (link to Amazon). Both products get high reviews, but in my experience, a simple DIY bleach and water mixture works just fine.

Another way to remove moss from your roof is to use a long, soft-bristled brush like this one.

Gently pull the brush down your roof towards the gutter. Never push the brush upwards because you could lift shingles and cause further damage.

This method works for moss that isn’t fully entrenched between the shingles.

Moss that has been living on your roof for a while won’t release easily, and you’ll likely need to apply a bleach and water mixture or moss killer loosen it up.

When I noticed moss on my roof, my first instinct was to rent a pressure washer and blast it away.

After a few minutes of research, I quickly learned that you should never use a pressure washer to remove moss or anything else from your roof.

Want to know when brands like GE, Bosch, Benjamin Moore, and Sherwin-Williams go on sale? Join our free newsletter to get deal alerts, giveaways, and exclusive content.

High water pressure can damage your roof by lifting and loosening shingles and washing away the granules, which are the tiny pebbles on each shingle.

Maintaining granules is important because they make shingles sturdier and fire-resistant and protect the asphalt coating from UV rays.

How to Prevent Moss from Growing on Your Roof

The best way to prevent moss from growing on your roof is to minimize its ideal growing environment.

Houses with multi-level roofs are at a higher risk of moss because the gutters on the upper roof often leak onto the lower roof, creating a perfect home for moss.

You can also prevent moss growth by installing zinc or copper coating strips (like these on Amazon) below the top ridge on both sides of your roof.

Zinc and copper are both very toxic to moss. As water comes into contact with these strips and runs down your roof, it takes the zinc or copper with it.

Nowadays, you can install a zinc or copper roof that naturally prevents moss. This type of roof is very rare, though.

Steel roofs cost twice as much as asphalt shingles roofs. Roofs made out of zinc or copper cost two to four times as much as steel.

If you happen to be in the market for a new roof and have a massive budget, ask your roofer about zinc/copper.

Other Frequently Asked Questions About Moss on Roofs

What Time of Year Does Moss Grow on Roofs?

Moss thrives when the weather is wet and cool. Their spores are produced in the Fall and the Spring. Moss can survive cold winters but turns brown and goes dormant in the Summer when the weather is extremely hot and dry. If you’re interested in the life cycle of moss, check out this in-depth article titled “How Moss Works” on HowStuffWorks.com.

Can Roof Moss Be Composted?

There are differing opinions about whether it’s wise to compost moss. Some say that moss will spread if you use it in compost. Others say that moss makes an excellent compost.

Moss is a non-vascular plant and survives as long as it has access to moisture. Because of this, it decomposes much slower than most materials and can take several years to break down completely. You can speed up the process by layering moss with grass clippings, but it will still take months or years.

Yes, vinegar will kill the moss on your roof and is a natural substitute for the bleach and water mixture. The process of removing moss with vinegar is very similar to the process with bleach and water. According to Hunker.com, simply clear your roof of debris, pour distilled white vinegar into a bucket with a few drops of dish soap so it will stick to the moss, spray the mixture on the moss, wait a couple of days for the moss to die, then clear it with a brush or garden hose.

Do not put Tide or any other laundry detergent on your roof. Laundry detergent is a de-greaser. It loosens the tar and pulls oils out of the shingles, causing the loss of granules. Despite what some articles claim, avoid using laundry detergent. There are so many other formulas to use, like vinegar, bleach, and solutions specifically made for killing moss, why risk it?

How Much Does It Cost To Remove Moss From My Roof?

If you do it yourself, the materials you need to remove moss from your roof are inexpensive.

All you need is a ladder, garden hose, spray bottle, and chlorine bleach. Most homeowners already have those supplies.

If the moss is thick and well established on your roof, like the photo below, you should hire a professional.

The cost depends on the size of your roof, the amount of moss, and the labor rates in your area.

As a rule of thumb, professionally removing moss will cost about 5% of what it would take to replace your roof altogether.

Moss is Not a Huge Problem…Unless You Ignore It

If you find moss on your roof, don’t panic. Moss thrives in damp, moist areas, including roofs that are north-facing or shaded by trees.

A simple mixture of bleach and water will kill the moss, causing it to dry up, release from your roof, and blow off in the wind.

If you ignore it, overtime moss will grow beneath your shingles and lead to more severe damage.

Now that you know why moss grows on roofs, how to remove it, and how to prevent it, it’s time to get to work! If you have any tips, techniques, or products that work well against moss, leave a comment and let us know!

4 thoughts on “Why Is Moss Growing on My Roof? (and How to Prevent It)”