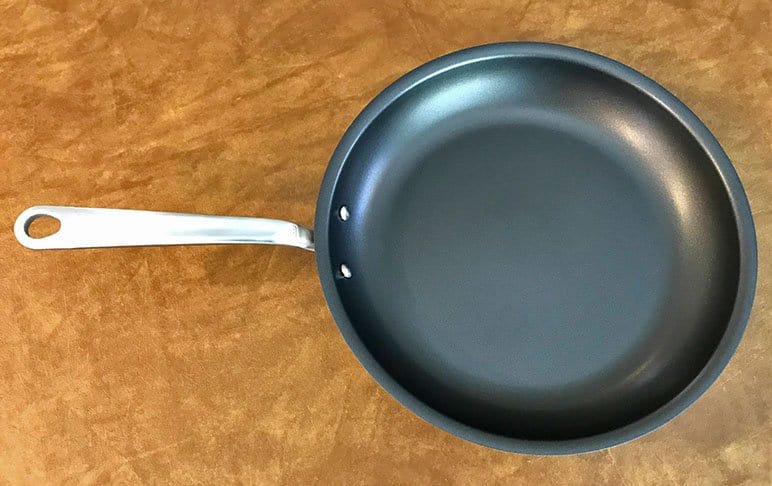 One of the most common misconceptions about cookware is that non-stick pans are unsafe.

This myth has been promoted by companies selling “ceramic” non-stick cookware. These companies claim ceramic non-stick coatings are safer and more environmentally friendly than traditional non-stick.

The truth is, non-stick coating companies used a chemical called PFOA in their manufacturing process in the past. And, according to the CDC, significant exposure to PFOA can impact “growth and development, reproduction, and injure the liver.”

Once these risks were identified, the EPA launched a stewardship program with non-stick coating companies to remove PFOA from the manufacturing process by 2013. And that’s exactly what they did.

The point is — all non-stick cookware made since 2013 is PFOA-free and completely safe.

To prove this point, Made In partnered with TÜV Rheinland, one of the world’s leading independent testing service providers, to conduct toxicology testing on its cookware.

TÜV Rheinland conducted a series of tests on Made In’s non-stick cookware and another brand’s ceramic cookware (a brand that touts superior safety).

The report is a bit technical, so I’ve broken down the key takeaways in this article.

Here’s what I found.

TÜV Rheinland performed three different tests on the Made In and ceramic non-stick pans.

For each test, the expert testers added a food stimulant to the pan before heating it. After significant exposure to heat, the food stimulant got tested in a laboratory to see if toxic materials leached from the pan’s surface.

The first test performed was an NIAS Test, which stands for Non-Intentionally Added Substances. This test ensures that any material in contact with food is safe. It measures substances that are not intentionally added into food contact materials but are present. These substances could be impurities of chemicals from an approved list, formed as by-products, or contaminants from the manufacturing process.

This test was performed by exposing each pan to a food stimulant containing 95% ethanol for 6 hours at 140F.

The results showed trace amounts of substances in both the Made In and ceramic non-stick pans. But, in both cases, the substances found were non-genotoxic and deemed completely safe by the FCM (Food Contact Materials) Regulation.

The second test was a Specific Release of Metals, which measures which metals are present on the pan’s surface. Both pans were exposed to the same food stimulant (.5% citric) and cooking temperature (212°F) for the same duration (two hours).

Both test results came back with zero red flags. For Made In’s Non-Stick Frying Pan and the competitors Ceramic Frying Pan, the findings were almost identical and, in both cases, were in compliance with the limits for one-time and extended use.

The factory that makes Made In’s PTFE-coated cookware is fully compliant with all regional regulations.

They have also decreased their energy production, water consumption, greenhouse gas emissions and increased their renewable energy. Plus, any wastewater produced is sent to a specific treatment facility.

Ceramic non-stick pans and cheap cookware you’ll find at the big-box stores break down quickly, leading to more waste. Most non-stick cookware ends up in a landfill after a couple of years. But, with Made In, you get cookware that lasts.

If you’re worried about the safety of non-stick cookware, worry no more.

The results of TÜV Rheinland’s testing prove that Made In PTFE-coated cookware is equally as safe as ceramic non-stick.

The ceramic cookware companies will continue to say their cookware is safer (because that’s the message that sells their products), but these tests have clearly debunked that myth.

If you’re looking for the best non-stick cookware and trying to decide between Made In and ceramic, I highly recommend Made In. It performs much better, lasts 70x longer, and is equally safe and non-toxic.

Made In offers 8-, 10-, and 12-inch frying pans and a 7-piece non-stick set. You can learn more and check out all the options on MadeInCookware.com.